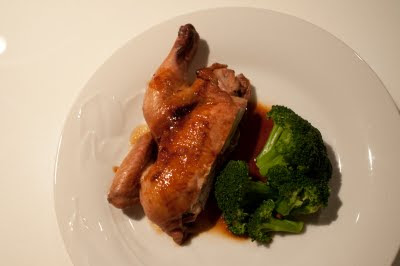 I go through phases of using recipes and then just cooking on my own. Having picked up a cornish game hen for a change rather than chicken (I love chicken, but sometimes, it can feel just blah), I wanted to do something more interesting than just salt, pepper, and olive oil.  I found this recipe on epicurious.com called Grandma's Roasted Cornish Game Hens. It looked easy and I had all the marinating ingredients, minus the ginger. It turned out fantastically. Moorish, savory, a little sweetness, juicy, tender - just how you want a little bird.

Pre-heat oven to 400 degrees and put rack in the center.  Wash the game hen with cold water, pat dry, and generously season with salt.  In a bowl, whisk together orange juice, soy sauce, vinegar, honey. I used a tablespoon of honey instead of the recommended teaspoon for a little extra sweetness. The final dish was still well balanced and not sweet at all.  Marinate hens in the mixture in a sealed bag for 15 minutes - the recipe called for chilling, but I just let the bird marinate on the counter.  I don't believe in putting a cold bird directly in a hot oven.

I was planning on saving the second half of the hen, but after the first half, could resist just picking it up and finishing the whole thing.  I would have hated for it to dry out in the fridge overnight.