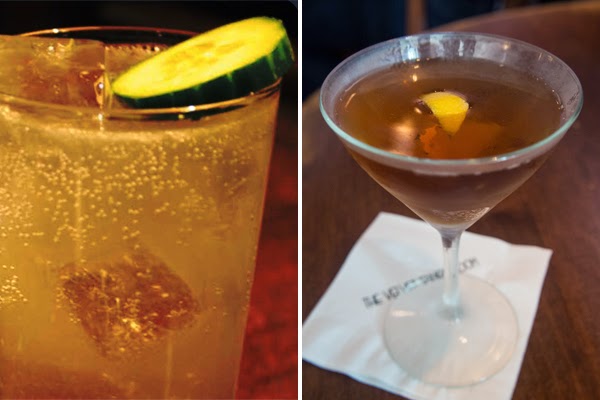 Sunset In Rio vs. Martinez #1

The second last game of the World Cup and this will be a let down for both of these teams that had high hopes of being in the final.

How to represent these teams when the classics have already been represented?

Since the world cup is coming to an end in Brazil, the Sunset In Rio is a perfect name for a last cocktail. Created by Pete Nevenglosky, one of the Avua Cachaça founders, the Sunset in Rio is made with 2oz Avua Cachaça Prata, 1oz limeade, 1oz soda water, 1 squeezed lime, served on the rocks and garnished with a slice of cucumber.

The Netherlands national football team is known as the Oranje after the House of Orange-Nassau. They also hold the unfortunate record for playing in the most World Cup finals without ever actually winning it. They didn't make it that far this year. In celebration of the Oranje, I picked the Martinez #1 cocktail made with  1.5oz Genever oude (an older style of genever that is maltier and sweeter than jonge), 1.5oz Martini Rosso, 1/8oz Orange Curaçao, 2 dashes Angostura bitters, stirred over ice, strained into a chilled cocktail glass, and garnished with an orange twist. Recipe credit: Diffords Guide.
Email Post
Labels: Brazil Cachaca Cocktail Drink the World Cup Genever Oude Martinez #1 Netherlands Oranje Playoff Sunset in Rio World Cup