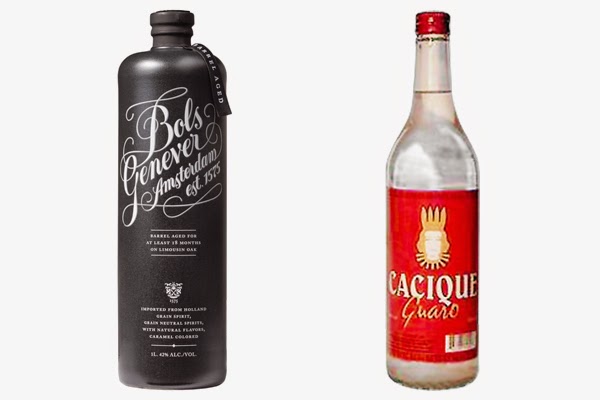 The Dutch Oven vs. Guaro & Fresca

Another genever cocktail again for the Dutch side of the draw, but this time with Barrel Aged Bols Genever. The Dutch Oven is a cocktail from bartender Jackson Cannon of the Hawthorne in Boston, MA and was published by Serious Drinks. It's made with 2oz Barrel Aged Bols Genever, 1 capful of soda water, 3 dashes of Peychaud's Bitters, 1 dash Regan's Orange Bitters, 2 sugar cubes. The sugar cubes, bitters, and soda water are muddled in a glass, the genever and and ice are added, stirred, is strained over a large ice cube in an old fashioned glass, and is garnished with a grapefruit twist.

Another drink made with Guaro, the traditional liquor (aguardiente distilled from sugar cane juice) is Guaro and Fresca soda. It is also often mixed with fresh juices, but the Fresca idea caught my eye. Mix 2oz of Guaro with 3oz of Fresca over ice in a highball glass, garnish with a half slice of grapefruit. Super simple, a little spirited, and refreshing.
Email Post
Labels: Costa Rica Drink the World Cup Guaro and Fresca Soda Netherlands The Dutch Oven World Cup