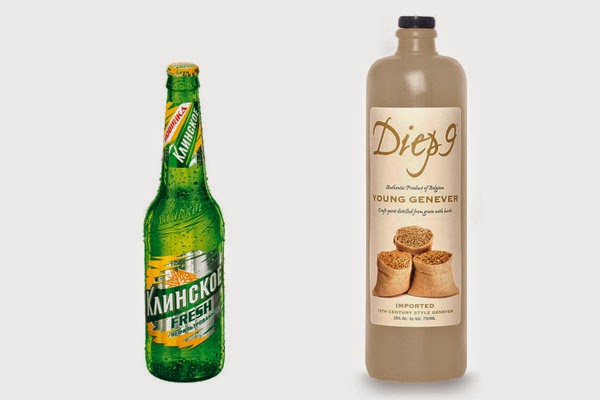 Jenever or genever is said to have been first produced in Bruges, Flanders and was originally created by distilling malt wine with herbs added to mask the less than palatable flavors. Diep 9 is a Belgian Genever that is imported into the US. A Genever Collins could be an ideal way to have a fresh, clean cocktail and still have some of the Genever essence. Add 1.5oz genever, 1oz lemon juice, 1/2oz simple syrup over ice in a collins glass. Top up with soda and garnish with a slice of lemon.

Having gotten the vodka out of the way, what else to drink from Russia? Beer. Klinskoye Svetloe is a crisp, hoppy beer that is brewed with rice to remove some of the bitter flavors.
Email Post
Labels: Beer Belgian Belgium Diep 9 Drink the World Cup Genever Jenever Klinskoye Svetloe Russia Russian